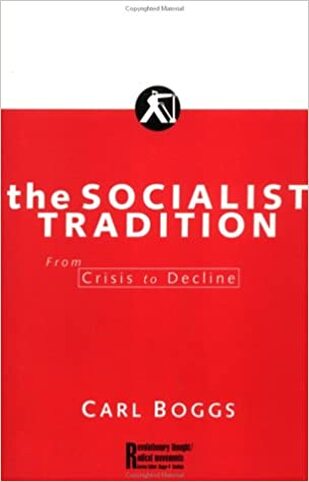 THE SOCIALIST TRADITION:  FROM CRISIS TO DECLINE by Carl Boggs

Routledge, 1995
This volume investigates the theoretical origins and historical development of the socialist tradition from the nineteenth century to the present, ultimately focusing on t he long-term decline of diverse socialist legacies after World War II.  The author addresses the constituent elements of democratic socialism, the forms and strategies it has embodied, and the material and ideological obstacles it has confronted.  While Boggs, a leading expert in the field, remains sympathetic to the goals of democratic socialism, he criticizes the main currents for failing to create a viable strategy grounded in democratic theory and practice.
​
“Carl Boggs has written a superb critical history of both Marxism and socialist politics, deftly and comprehensively exploring the achievements and limits of a tradition going back to the era of Marx and Engels.  There is no better overview of socialist history to be found in the English language.  A must read for anyone interested in this important topic.
​
John H. Kautsky
Political Science, Washington University, St. Louis
AMAZON LINK