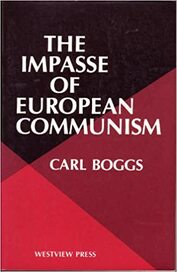 THE IMPASSE OF EUROPEAN COMMUNISM by Carl Boggs

Westview Press, 1982
In this volume the author confronts a major historical dilemma for Socialist and Communist parties – how to work within the system of liberal capitalism, achieving some degree of success without abandoning their oppositional political identity.  The main focus here is the Italian Communist Party (PCI), the largest of all non-ruling such parties after World War II.  PCI leaders opting for a “democratic road to socialism” believed fundamental change could occur by means of parties utilizing existing political institutions and practices.  The conclusion reached by Boggs, based on thorough historical and political analysis, is that the “democratic road” strategy has failed dismally, producing deradicalization with extensive adaptation to the institutions and norms of liberal capitalism.

“In this pathbreaking book, Carl Boggs has subjected the postwar evolution of European Communist parties to deep critical scrutiny, revealing that the famous “democratic road to socialism” championed by many Marxist theorists is fraught with overwhelming pitfalls and contradictions, can easily lead in the end to political futility – a trajectory exemplified by the postwar Italian Communists.  One result has been a steady process of deradicalization that leaves the capitalist system fully intact.”