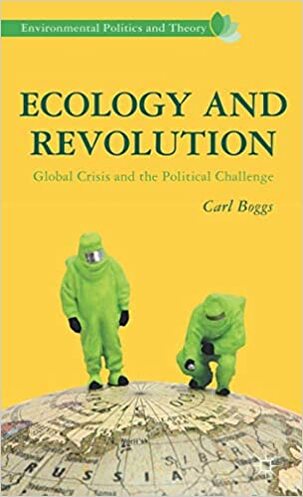 ECOLOGY AND REVOLUTION: GLOBAL CRISIS AND THE POLITICAL CHALLENGE by Carl Boggs

Macmillan, 2012
This book is an in-depth exploration of the global ecological crisis in the larger context of historical conditions and political alternatives shaped by failure of the existing system to adequately confront the crisis.   Going far beyond the issue of global warming, the volume explores a range of solutions provided by liberals, environmental reformists, anarchists, and classical Marxists, revealing how ineffective each has been in meeting this unprecedented challenge.  The author calls for a distinctly radical option merging the European Green tradition, Marxism, and the force of modern popular movements.
​
“After examining the ecological crisis afflicting humanity and the planet, Carl Boggs concludes that only a radical political solution can alleviate our problems.  For making such a clear call for systemic change, he will stand as a visionary scholar for generations to come.”
​
George Katsiaficas
Author of Subversion of Politics
​
“Grounding his critique in an approach drawn from Western Marxism, nonviolent resistance, and today’s new social movements, he persuasively articulates a post-liberal, post-Marxist transformative politics to create a more ecological economy and society based on democratic governance.”
​
Timothy W. Luke
​Political Science, Virginia Tech
AMASON LINK