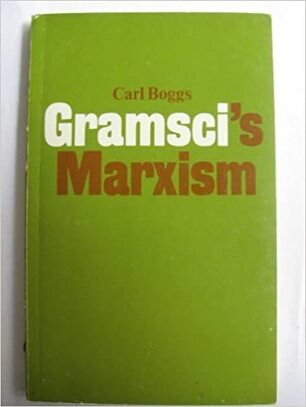 Pluto Press, 1976
This remarkable book explores the full breadth of Antonio Gramsci’s life and work – the first Marxist theorists to grapple with the complex problems of revolutionary change for advanced capitalist societies.  As an Italian, Gramsci was also the first to identify the crucial role of ideological and cultural struggles against capitalist domination.  Boggs skillfully links crucial motifs of the Prison Notebooks to Gramsci’s earlier work as a theorist of factory councils and later as a founder of the Italian Communist Party (PCI).  This is the first comprehensive treatment of Gramsci’s creative social and political thought in English.

“Carl Boggs has written a truly superb introduction to the work of Antonio Gramsci, arguably the most important political thinker of the twentieth century.  Gramsci’s Marxism does a masterful job of connecting diverse elements of the Italian Marxist’s rich thought – linking above all the crucial importance of ideology, role of mass consciousness, a new theory of intellectuals, and efforts to establish a critical philosophical foundation of Marxism.  This is simply the best general overview of Gramsci’s thought in English.”