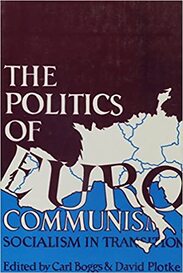 THE POLITICS OF EUROCOMMUNISM: SOCIALISM IN TRANSITION by Carl Boggs with David Plotke

South End Press, 1980
In this wide-ranging anthology, the authors consider the origins and development of the phenomenon referred to as “Eurocommunism” within the postwar framework of southern Europe.  The book explores the transformation of Communism within its global and European contexts, while simultaneously focusing on the domestic politics (including social movements) of Italy, France, and Spain.  A concluding section analyzes the historical relevance of Eurocommunism along with its prospects for the future.  Along with Boggs and Plotke, contributors include Fred Block, Paul Joseph, and Diana Johnstone.
“This volume contains the best critical analysis of European Communism we have seen”.