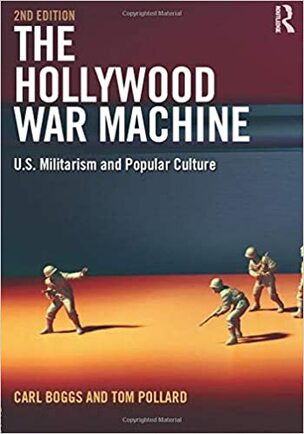 Paradigm, 2007
Following the pattern of great imperial powers throughout history, the U.S. has produced a culture of militarism in which themes of warfare, combat, and patriotism resonate across the entire society.  Perpetual and far-reaching military interventions have been an enduring feature of national life, akin to an addiction consuming the political system, mass media, corporate structures, popular culture, and daily life.  The overriding motif of this book concerns the growing influence of militarism within popular culture, in this case notably Hollywood films.  What is called here “The Hollywood War Machine” refers to the production of studio movies that depict and glorify the heroic exploits of U.S. armed forces, either directly or indirectly.

“This politically-informed book demonstrates how war movies are more than just entertainment.  They serve – intentionally or not – as a cultural weapon of global empire.  Clearly written, richly researched, and persuasively argued, the Hollywood War Machine is a feast for any opponent of militaristic propaganda.”

Michael Parenti
Author of Land of Idols and Superpatriotism
​
“A critical cultural chronicle of postwar American political history.  Engaging and penetrating, it patiently relates the complicity of Hollywood in the culture of American militarism.”
​
Jan Nederveen Pieterse
​University of Illinois
AMAZON LINK

(Page 11-12 of Introduction)
At a time of expanding U.S. imperial power, when the American people are asked to endure burdensome costs and sacrifices, the always-vital mechanisms of legitimation take on new meaning. All power structures need systemic ideological and cultural supports, or "hegemony," along the lines theorized by Antonio Gramsci, but the imperatives of empire serve to ultimately intensify these ordinary requirements. Empire, a bloated war economy, constant armed interventions--all these must be made to appear "natural," routine, and desirable if not noble. Themes of national exceptionalism, superpatriotism, the glories of high-tech war, and the demands of a (global) civilizing mission help satisfy this legitimation function, as does the impenetrable hubris associated with economic, technological, and military supremacy. To translate such an ideological syndrome into popular language, to fully incorporate it into the political culture, is the task not so much of a classical propaganda apparatus as of a developed educational system and media culture appropriate to advance capitalism. In the United States today, as we have seen, media culture is an extension of megacorporations that comprise the largest and most influential media-entertainment complex the world has ever seen. And the Hollywood war machine, as we argue in the following chapters, has become increasingly central to this complex--a crucial instrument for the legitimation of empire.

The U.S. plan for global domination brings with it a growing concentration of corporate, government, and military power surrounded by a refined law-enforcement and surveillance apparatus that, while in some ways indispensable, cannot by itself possibly furnish legitimation. That is the function of media culture, Hollywood filmmaking contributes admirably to this function, despite the release of pictures here and there that run counter to the dominant paradigm. Legitimation occurs not primarily by means of censorship or propaganda (though both exist) but through ordinary canons and formulas of studio production, where "conspiracies" are scarcely necessary to enforce hegemonic codes. The repetitive fantasies, illusions, myths, images, and story lines of Hollywood movies can be expected to influence mass audiences in predictable ways, much in the fashion of advertising. One popular response to the flood of violent combat, action-adventure, sci-fi, and horror films is a stronger readiness to support U.S. military operations, which, in a patriotically charged milieu, will require little justification. (Indeed the popular ethical standards for what constitutes a "rational" armed intervention are scandalously loose.) This aspect of legitimation is unique to the foreign policy of the United States, the only nation with a sprawling network of military bases around the world.

To be sure, complex societies like the United States have many agencies of politicization, but none today rival the power of media culture. As Douglas Kellner points out: "Media culture spectacles demonstrate who has power and who is powerless, who is allowed to exercise force and violence, and who is not. They dramatize and legitimate the power of the forces that be and demonstrate to the powerless that if they fail to conform, they risk incarceration or death." (Kellner, Media Culture, 2.) It is a cultural overwhelmingly geared toward young people--not only film but also TV, video games, and music--whose social views are in their formative stage and thus highly malleable. That such views might be partial, uneven, and lacking in coherence hardly detracts from their intensity, which often achieves its peak around issues of patriotism and use of military force. The corporate media routinely translate U.S. imperial agendas into deeply felt popular beliefs and attitudes about the world and the U.S. role in it, usually validating something akin to the motif of Manifest Destiny. Despite its liberal image, therefore, Hollywood tends to produce expensive, high-tech, entertaining movies that, directly or indirectly, help satisfy the ideological requirements for empire. One might go further: owing to powerful tendencies within the general culture, the once-prevailing liberal tradition itself appears to have lost its significant hold on public opinion as it collapses into the new conservative hegemony. (On the decline of the liberal tradition, see H. W. Brands, The Strange Death of American Liberalism [New Haven: Yale University Press, 2001])