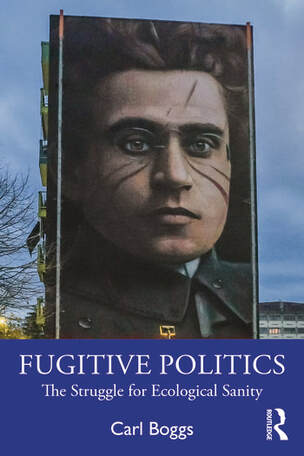 FUGITIVE POLITICS: THE STRUGGLE FOR ECOLOGICAL SANITY  by Carl Boggs

Routledge, 2021
This book has its unusual origins in a bizarre confluence of personal narratives – one going back to an intellectual mentor during graduate-student years, the other involving a friend engaged in antiwar politics at the time of the Vietnam War.  The mentor was the late Sheldon Wolin, whose last (and posthumous) book was titled Fugitive Democracy, a lengthy collection of brilliant essays on political theorists ranging from Thomas Hobbes to Karl Marx, Max Weber, the Frankfurt School, and more recent writers such as John Rawls.  As professor of political science at U.C., Berkeley during the 1960s, Wolin would exert a profound impact on my intellectual and political development well past that turbulent decade.  The activist friend is Howard Mechanic, author of The Fugitive Candidate, which traces the lengthy history of Mechanic’s protests against the Vietnam War as a student at Washington University in St. Louis (where I taught in the 1970s), his improbable arrest and prison sentence, his underground years in Arizona, his ultimate detection and arrest, and his pardon in 2000 by President Bill Clinton.  I was honored to be able to write the foreword to Mechanic’s fascinating book, its appearance coinciding with a several-part podcast on his remarkable saga.

“In Fugitive Politics Boggs returns to his days as a campus radical, bringing together two influential yet seemingly disruptive narratives in order to fashion a fugitive politics repurposed to challenge the misplaced ontological confidence of much of today’s academic left.  In so doing he proves that today’s algorithmic undertaking of politics often serves as an ontological block to capturing the analogue experience of political repression that Boggs and his contemporaries lived on a daily basis.  Blending the prehensive nature of political activism with his pathfinding theoretical work on Gramsci, Lenin, and Marx, and his prescient forays into ecosocialism, Boggs creates new zones of confrontation, sites of scholarly outlawry, enclaves of political insurgency, and fugitive deploys equipped to challenge the arc of historical struggles that could not be articulated by political sages of yesteryear.  This book is vintage Boggs, fearless and forward-looking, at the cutting edge of the political discourse of the day, a beacon of light in these dark times.
​
​​Peter McLaren
​Author of Pedagogy of Insurrection and many other books.
ROUTLEDGE LINK