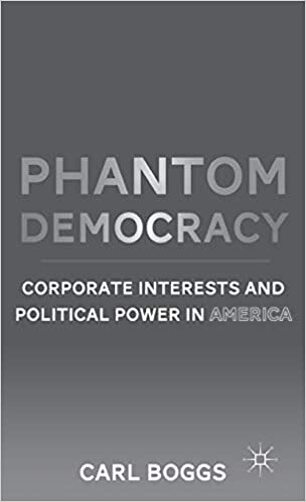 Macmillan, 2011
In this powerful new book, Boggs traces the historical evolution of American politics by focusing on the gradual triumph of corporate and military power over democratic institutions and practices.  The events of 9/11 and their aftermath, including the war on terror, two lengthy wars, new threats of war, and massive increases in Pentagon spending, have only deepened the trend toward ever more concentrated forms of power in a society that ostensibly embraces democratic values.  Written in the tradition of C. Wright Mills.
​
“Carl Boggs argues that the American political system is no longer democratic in any recognizable sense, and that represents a profound threat to popular sovereignty, to comity among nations, and to the health and well-being of the American people not to mention the global ecosystem.  No book could be more timely or urgent.”
​
John Sanbonmatsu
​Worcester Polytechnic Institute
AMAZON LINK