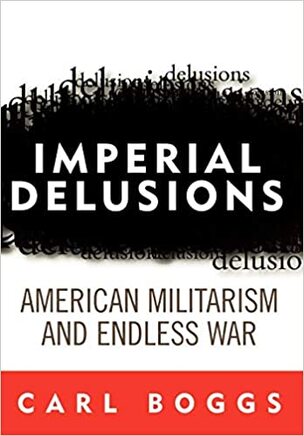 Rowman and Littlefield, 2005
This book examines the rise of U.S. militarism in its multiple dimensions – historic, economic, political, cultural, global – as the imperial ethos becomes more deeply embedded in the very fabric of American life.  By the early twenty-first century it seemed appropriate to refer to the militarization of both U.S. foreign policy and American society as a whole.  There can be little doubt that warfare motifs, discourses, and agendas increasingly shape all dimensions of social life, impacting everything from language, media, culture, and the workplace to politics and forms of governance.
​
“The U.S. defends its militarism and imperialism by arguing that it is trying to promote democracy.  But . . .  the postwar historical record reveals a pervasive legacy of U.S. support for military dictatorships and authoritarian regimes.  In his brilliant new book, Carl Boggs weighs this and numerous other contradictions that foretell the demise of the ‘lone superpower’.  Imperial Delusions is the first book to deal comprehensively with the historical, economic, political, cultural and indeed criminal aspects of American militarism.”
​
Chalmers Johnson
​Author of Blowback and several other books on U.S. militarism
AMAZON LINK