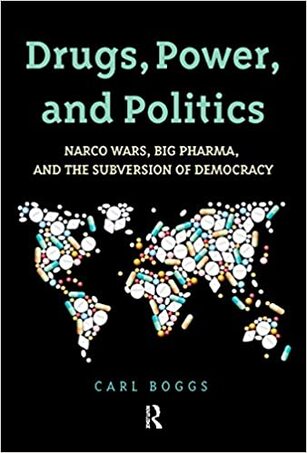 DRUGS, POWER, AND POLITICS:  NARCO WARS, BIG PHARMA, AND THE SUBVERSION OF DEMOCRACY by Carl Boggs

Paradigm, 2015
To critically explore the drug phenomenon in American society, the author must investigate multiple realms of public life, from social policy to corporate interests, law enforcement, health and medicine, foreign policy, political ideology, and role played by both federal and local governments.  The scandalous War on Drugs, going back to the early twentieth century, intersects with all these realms.  Driven by an ensemble of wealthy and powerful interests, this war has caused far more damage – politically, economically, socially – than could ever be attributed to drug consumption as such.  Yet this crusade has done nothing to reduce drug use or ameliorate problems of abuse, overdose, and addiction – surely nothing to justify the vast material and human resources poured into a prohibition agenda spanning many decades.  One outcome, analyzed in this book, is the rise of a “medical-drug behemoth” of vast proportions.
​
“Drugs, Power, and Politics is that rare thing: an urgently written book about a profound political and ethical crisis that appears on the scene at the precise moment when we need it most.  Carl Boggs deftly navigates the warped history of American drug policy and the misbegotten war that has ravaged two generations of young Americans and shredded basic civil liberties for us all.  Boggs focuses a merciless light on this corrosive form of social control that masquerades under a banner of moral rectitude.”