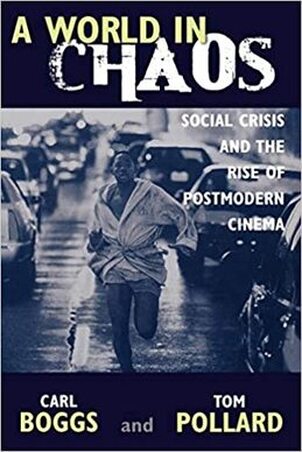 ​A WORLD IN CHAOS:  SOCIAL CRISIS AND THE RISE OF POSTMODERN CINEMA   by Carl Boggs with Tom Pollard

Rowman and Littlefield, 2003
This book explores several dominant trends in Hollywood filmmaking that we refer to as “postmodern cinema” – trends that both reflect and influence the general socio-historical environment within which movies are produced, distributed, viewed, and critically assessed.  We argue that postmodern films embellish a strong pull toward diversity, critique, marginality, and (at times) rebelliousness, reproduced largely on the edges of the mainstream culture industry.  The book focuses on such maverick directors as Oliver Stone, the Coen Brothers, Woody Allen, Martin Scorsese, John Sayles, and John Waters.
“A World in Chaos is an outstanding survey of the cultural, economic, and social dimensions of postmodern cinema that rereads the world since the 1960s through contemporary American films.  Boggs and Pollard also reappraise critical changes in the politics, economics, and aesthetics of the global film industry amidst the tremendous transformations experienced by American society since the Vietnam War.  This book should engage anyone interested in contemporary social criticism and cultural studies.”                                                                         Timothy W. Luke
​Political Science, Virginia Tech
AMAZON LINK