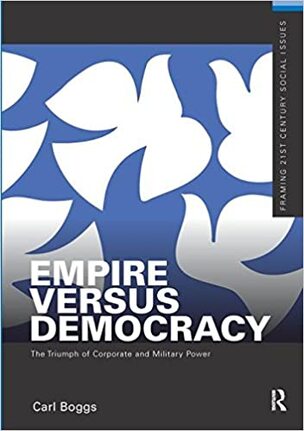 EMPIRE VERSUS DEMOCRACY:  THE TRIUMPH OF CORPORATE AND MILITARY POWER by Carl Boggs  ​

Routledge, 2011
Here Carl Boggs traces the trajectory of American politics since World War II, with emphasis on the growing concentration of corporate, military, and state power.  The rise of the U.S. as an imperial nation has meant the steady expansion of a permanent war economy, security-state, and proliferation of American bases around the world.  All this has been marked by recurrent military interventions, massive armed-forces expenditures, heavy reliance on mass surveillance, and diminished resources for public infrastructures and programs.  This has meant a drastic weakening of electoral and legislative politics.
​
“In this valuable book Carl Boggs tackles one of the central dilemmas of American and global democracy: does U.S. foreign policy serve democracy or merely reflect and reinforce the dominance of what he calls the security state and Seymour Melman termed the permanent war economy?   Boggs argues that a confluence of military and corporate interests thwart American democracy as they reach far beyond national boundaries.  This book extends Marx’s focus on the logic of capitalism into the global realm.”
​
Ben Agger
University of Texas
AMAZON LINK