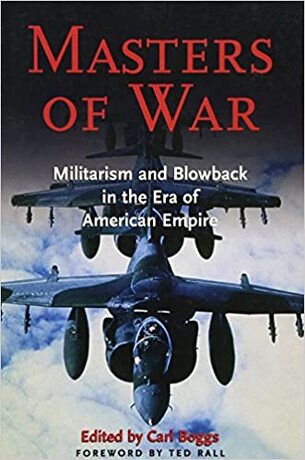 MASTERS OF WAR:  MILITARISM AND BLOWBACK IN THE ERA OF AMERICAN EMPIRE by Carl Boggs     ​

Routledge, 2003
Few American citizens view their country as an empire, but as the contributions to this wide-ranging anthology argue, the U.S legacy of global military power runs long and deep. Despite all the rhetoric about democracy and human rights, U.S. leaders have been waging more or less continuous war for more than a century – warfare that has often generated fierce resistance in the form of blowback.  Authors of these pathbreaking essays include Noam Chomsky, Chalmers Johnson, Michael Parenti, James Petras, Peter McLaren, Douglas Kellner, and Norman Solomon as well as Boggs.

“This is an excellent collection of articles on the crucial question of U.S. militarism, its impact abroad and within American society itself, along with its general relationship to imperialism. Over the last several years it has become clear that the threat to peace and social justice lies not only in corporate globalization, but in the vastly disproportionate military and economic power of the U.S. and the willingness of a political elite to use that power ruthlessly. Despite the urgency of this question, little has been written on it.  This collection begins to fill that gap.”
​
Barbara Epstein
​History of Consciousness Program, U.C., Santa Cruz
AMAZON LINK