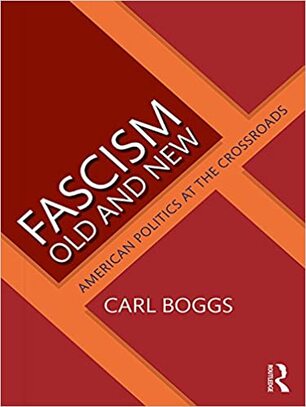 FASCISM OLD AND NEW: AMERICAN POLITICS AT THE CROSSROADS by Carl Boggs  ​

Routledge, 2018
Deep historical trends suggest the U.S. could be moving toward a distinctly novel form of fascism, embracing elements of the historical phenomenon as it appeared in such countries as Italy, Germany, Japan, and Spain, while also departing in significant ways.  A twenty-first century fascism would hardly be revolutionary or totalitarian, involving (for the U.S.) no dramatic break with the past as it would build on firmaments of entrenched power going back to World War II.  In this book, the author explores new political and ideological terrain in considering prospects for a gradual development of fascism in modern American society.  He persuasively argues that current fascistic trends, perhaps most visible in the U.S., reveal a closer affinity with Mussolini’s Italy (corporate state) than with the more extreme Nazi German case of tyranny and genocide.

“Carl Boggs’ Fascism Old and New systematically explores the defining features of European and Japanese fascisms that emerged between the two World Wars and examines the extent to which new configurations of economic, political, military, and cultural power constitute the potential for fascism in contemporary American society. Boggs’ analysis suggests that highly capitalist and militaristic societies like the U.S. could be susceptible to fascist trajectories.”
​
Douglas Kellner
Author of Cinema Wars and many other books
​
“In this book Carl Boggs has produced a brilliantly layered and comprehensive commentary on America’s slide into fascism that is historically illuminating, theoretically novel, and enormously informative in its scope and development.”
​
Henry Giroux
Author of American Nightmare: Facing the Challenge of Fascism
​
“While most writers fixate on Donald Trump and Twitter, Carl Boggs digs deeper into the political and social realities of America today.  For Boggs, the danger of fascism is not one rogue politician, but is rooted in U.S. history and the growing combined power of corporations, the state and militarism.  Everyone concerned about the future of America, and indeed the world, needs to read this book.”
​
Jerry Harris
​National Secretary, Global Studies Association
AMAZON LINK