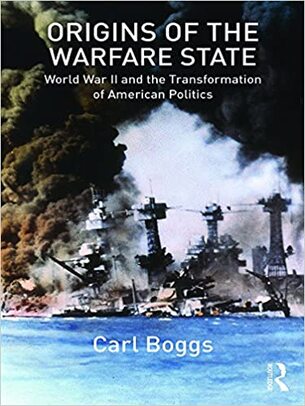 ORIGINS OF THE WARFARE STATE:  WORLD WAR II AND THE TRANSFORMATION OF AMERICAN POLITICS by Carl Boggs

Routledge, 2017
The post-World War II emergence of a full-blown state of perpetual war is arguably the most important feature of contemporary American politics.  This book examines the warfare state in terms of a broad ensemble of structures, policies, and ideologies: permanent war economy, national security-state, global expansion of military bases, merger of state, corporate, and military power, and imperial presidency, the nuclear complex, superpower ambitions.  The author argues that the “Good War” of the 1940s led to an authoritarian system that has grown steadily across the postwar decades, undermining liberal-democratic institutions and values in the process.
​
“If you believe democracy matters, read this book.  Carl Boggs has written the most detailed, convincing, and insightful book yet to appear on the origins and spread of the American warfare state.”

“Insightfully linking current structures, policies, and ideology with historical conditions that gave rise to the U.S. as global hegemon, Carl Boggs brilliantly explores the emergence of a permanent warfare state and provides the reader with an essential understanding of the national security-state and imperial presidency since World War II.”
​
​Francis Shor
Wayne State University, author of Dying Empire
​
Origins of the Warfare State opens up a subject that has been nailed shut for far too long – the ongoing bad effects of the ‘good war’.   This book should be a catalyst to explore the realities of how the U.S. and the rest of the world continue to suffer from dire consequences set in motion by the war that ended more than 70 years ago.”