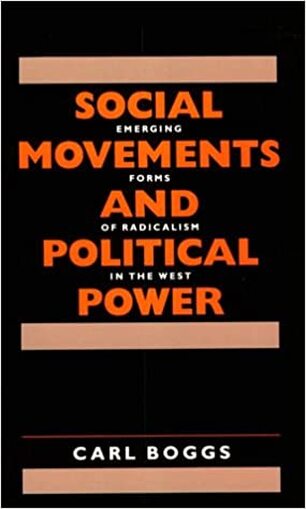 SOCIAL MOVEMENTS AND POLITICAL POWER: EMERGING FORMS OF RADICALISM IN THE WEST by Carl Boggs  ​

Temple University Press, 1986
This volume follows the complex and often conflicted trajectories of what had become known as new social movements in the 1970s, and beyond.  Here the focus is mainly on the environmental, feminist, antiwar, and community-based struggles that emerged from the sixties new-left and countercultural tendencies.  The author shows how the new movements encountered the realm of politics and state power in a variety of modalities:  Eurosocialism, the new (leftist) populism in the U.S., the European Greens.  Those engagements were driven by the search for new expressions of radicalism in the West.
​
“Carl Boggs has written one of the most comprehensive, stimulating, and provocative books we have on the new social movements today.  It deserves the highest praise for the issues it raises, its clarity of thought, and its splendid stye.  This is surely ‘must’ reading on the subject.”
​
Murray Bookchin
Author of Post-Scarcity Anarchism and many other books
AMAZON LINK