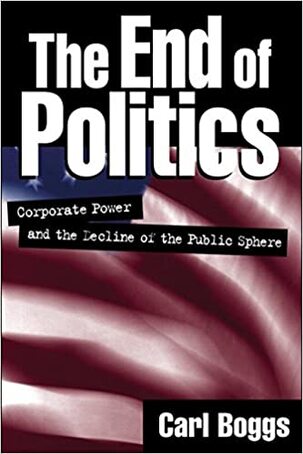 THE END OF POLITICS:  CORPORATE POWER AND THE DECLINE OF THE PUBLIC SPHERE by Carl Boggs   ​

Guilford Press, 2000
This book explores what might be called a “crisis within the crisis” – the great deterioration of political discourse and action in the U.S. in the two decades preceding the year 2000.  The realm of politics has steadily corroded in a society that has historically celebrated the virtues of open dialogue, citizenship, and democratic participation.  It has given way to a corrupt, authoritarian, in many ways depoliticized public sphere increasingly colonized by corporate and state power.
​
“For some 30 years Carl Boggs has been a perceptive and calm exemplar of radical thinking.  In The End of Politics, with his usual clarity and care, he assesses the corrosion of political thought and action that besets American life . . .  [It] is a vital contribution to the understanding of a devitalizing phenomenon – the dwindling political will and practice in the era of corporate rule.”
​
Russell Jacoby
​Author of The Last Intellectuals and many other books
AMAZON LINK